When two artists converge from completely different musical backgrounds and styles, they always 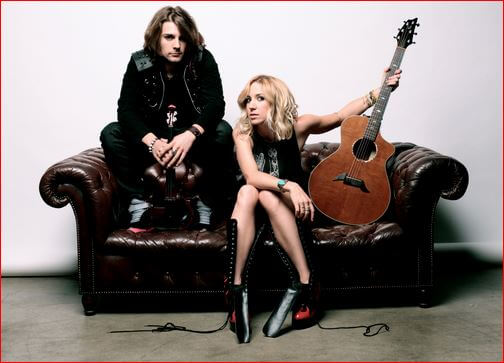 run the risk that their vision of “opposites-attract” musical matrimony will not play out as intended. Talent regardless, (because if talent were the only thing requisite for a successful collaboration, the world would still be talking about Metallica’s and Lou Reed’s Lulu) the success of any artistic partnership apparently depends upon finding and maintaining an optimum symmetry, regardless of different backgrounds, and building off one another to produce a common creation.

Based on the merits of speculation alone, I wouldn’t normally be eager to endorse a collaboration between a folksy singer/songwriter and a DJ known for his high-voltage electric violin performances. But it just so happens, in the case of Rome Will Burn, that prior genres defining their solo careers are completely irrelevant; pop is what both of them were destined to do, and they were destined to do it together.

I had the honor of getting a pre-release copy of Rome Will Burn’s soon to be released EP, and, without being overly familiar with the origins of this duo, I can’t imagine it took longer than a few seconds of playing with each other to realize they were a match made in heaven. Frontwoman/guitarist Alyssa Suede, who also happens to be Beck’s sister, carries whatever her counterpart Carlton Moody (AKA DJ Manifesto) throws at her, resulting in a number of essays into the sub-genres of electro-pop that, impressively, hit almost all the time.

Their first single off this EP, “Chameleon”, finds both of them in their most radio-friendly form (though it’s frankly a close competition) and sets the bar for Alyssa’s vocal diversity quite high. Throughout the song she transitions seamlessly from a honey-coated ire-fueled timbre to an almost spoken-word rhythmic pulse, adding dynamite and dynamics to the appropriate parts. Not to mention some nice word painting which further keeps things interesting (don’t think we didn’t notice you sped up the rhythm on the word “fast”, Ms. Suede). And sticking true to the intrinsic quality of pop music, the song picks an emotion and does it well: “I know it’s just human nature/But you had to go and f*** up again/I should just get up and leave ya/But I know you’re gonna pull me back in.” It’s a piece destined for both heavy airplay and for repeated listenings: a win/win.

Similar to “Chameleon”, we have “Live by the Beat” and “Waging Romance” presenting additional compelling arguments for RWB occupying the ionosphere. In “Beat”, Manifesto’s penchant for finding the “exact right sound” becomes very evident, as the variety he injects into this club-friendly thumper defines its accessibility beyond its shiny fist-pumping exterior and gives Alyssa a vehicle to carry this visceral tune. And though it’s always refreshing, Manifesto’s violin-playing on “Waging Romance” is downright brilliant. The intro plays out like The Piano Guys discovering a computer for the first time and eventually escalates into a virtuosic solo which should really be mandatory in every pop song ever from here on out.

Slowing it down a bit, we enter the realm of CHVRCHES-esque dream-pop with “These Three Words”. Alyssa, once again, doesn’t overreach lyrically but instead decides where she wants to go and arrives there strongly. In a way she’s like that perfect girl who can anomalously meet and surpass all the different descriptions for delineating a girl’s attractiveness: she’s proven to us she can be sugar-sweet adorable, smoking hot, and now all of the sudden she wants to be breathtakingly beautiful? Well she bites off a lot but it’s not more than she can chew. She handles the plodding, melodic ambience warranted by Manifesto’s adept arrangement of piano, strings, and sustained synths, expertly, giving us the impression that this is what she’s been doing her whole life.

There will always be room for pop on the charts, and in only their first release, Rome Will Burn seems to bring enough to the table to fit perfectly into the current electro-pop mould while still doing enough to shape it themselves. They still need to find their identity a bit, but that’s usually what the first EP is for–to see what works and what doesn’t. If their ambition, rapport and versatility persists at this rate, they will definitely be a band to watch out for in the very near future.

This entry was posted in Music. Bookmark the permalink.